Tier 1 methodologies use fixed values for GHG emissions per head of livestock, so changes in total emissions reflect only changes in livestock populations (Figure 1). This approach assumes that animals of different ages and breeding status have the same emissions and that emissions per head do not vary over time. The IPCC Guidelines provide Tier 1 default values for emissions per animal per year, which are applicable to broad continental regions, and do not reflect specific circumstances within countries (Text Box 1).

As of 2017, all but 21 developing countries use the Tier 1 IPCC default values for estimating enteric fermentation emissions in their national GHG inventories (Wilkes et al. 2017). Even where countries use national data to develop country-specific emission factors, these emission factors often do not change over time, so similar to Tier 1 default factors, reductions in livestock emissions can only be achieved if total animal numbers decrease. The value of a Tier 1 approach to policy makers is therefore limited. 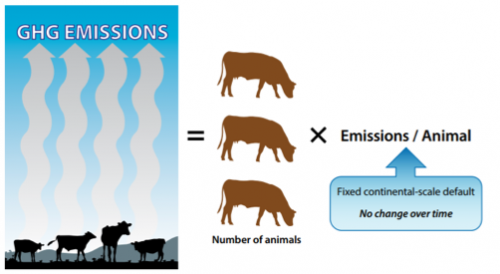 Tier 2 approaches require more detailed information on different types of livestock in a country, and data on livestock weight, weight gain, feed digestibility, milk yield and other factors reflecting management practices and animal performance. These data are used to estimate feed intake (either as dry matter or as gross energy) required by the animals to maintain the specified level of performance. Intake is then converted to methane emissions by multiplying energy intake by a methane conversion factor (methane emissions per unit of energy intake) (Figure 2). This conversion factor changes with the quality of animal diet. Therefore, a Tier 2 approach is better able to reflect management practices, diets and animal productivity in different production systems or regions of a country. Emissions per animal estimated using a Tier 2 approach can also change over time if data on management practices or productivity are updated (Text Box 2). A Tier 2 approach is therefore essential for capturing the effects of livestock development and climate change mitigation policies on emissions from the sector.

Using a Tier 2 approach in a national GHG inventory has several benefits:

Some countries refer to their approach as a “Tier 2/Tier 3” or “Tier 3” approach. Tier 3 approaches are not clearly defined in IPCC guidance. IPCC (2006) suggests that Tier 3 approaches may use “sophisticated models that consider diet composition in detail, concentration of products arising from ruminant fermentation, seasonal variation in animal population or feed quality and availability, and possible mitigation strategies” and may address factors affecting feed requirements or variations in methane conversion rates. Some of these factors are also considered in country-specific Tier 2 models. Therefore, this collection of Tier 2 cases makes no distinction between Tier 2 and Tier 3 approaches.

Text Box 1 – Are emission factors higher or lower when Tier 2 approaches are used, and how do trends in emission intensity change? The example of dairy cattle

Tier 2 approaches are used to estimate enteric fermentation emissions from cattle in 62 countries’ national GHG inventories. National inventory reports from 48 countries provide sufficient information for dairy cattle to compare Tier 1 and Tier 2 emission factors, and comparisons of trends in emission intensity (kg CH4/kg milk) of dairy production are possible for 28 countries. These comparisons show that using a Tier 2 approach results in emission estimates that better reflect national conditions, and that reductions in emission intensity due to increasing productivity can be tracked if a Tier 2 approach is adopted. 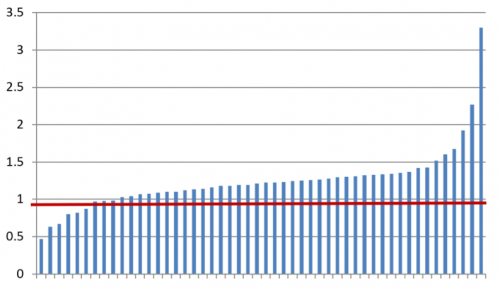 Figure 4: Average change in emission intensity (EI, kgCH4/kg milk) between the first reported use of a Tier 2 approach and the latest reported inventory 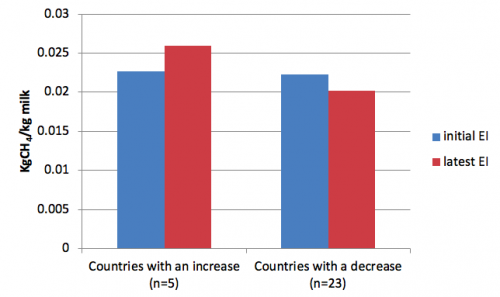 Table 1: Number of countries using dynamic approach or static EFs for dairy and other cattle emissions

The Paris Agreement came into force in November 2016. UNFCCC Decision 1/CP.20 invited Parties to submit their intended nationally determined contributions (INDCs) to the Conference of Parties, and Decision 1/CP.21 invited Parties to communicate their first nationally determined contribution (NDC) by the time the Party ratifies the Paris Agreement. For most countries, their INDC became their first NDC.

By April 2018, 175 of the 197 Parties to the UNFCCC had ratified the Paris Agreement. For developed countries, NDCs should be economy-wide absolute emission reduction targets (Paris Agreement, Article 4.4), while developing countries should move toward economy-wide emission reduction or limitation targets over time. Livestock emissions are thus included in the NDCs of most developed countries. Analysis of the INDCs of 150 developing countries shows that 48 countries explicitly mention intentions to reduce emissions from livestock-related sources in their INDC, while a further 44 countries include livestock in the scope of their NDC along with the agriculture sector in general or as part of an economy-wide target (Wilkes 2017). In addition, at least 17 countries have proposed nationally appropriate mitigation actions (NAMAs) to reduce livestock-related emissions.

Overview of how countries use Tier 2 approaches for livestock

How many countries are using a Tier 2 approach?

Figure 5: Number of countries and instances of first use of Tier 2 approaches from 1990-2017 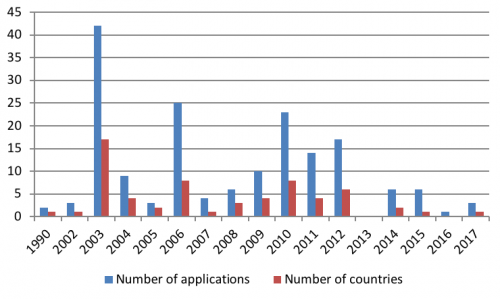 The IPCC Tier 2 model is set out in the 1996 and 2006 Guidelines and 2000 Good Practice Guidance. The IPCC model for enteric fermentation is largely based on ruminant net energy models described in NRC (1984, 1989). In brief, emission factors for each animal category are based on estimated daily gross energy intake (GE) or feed intake (expressed as dry matter intake, DMI) and a methane conversion rate (Ym, % of gross energy in feed converted to methane). Daily emissions per head are then converted to annual emissions per head:

Since direct measurements of feed intake are rarely available, the IPCC model estimates gross energy intake from animal performance data reflecting the net energy required for maintenance, activity, growth, lactation and other functions. To estimate gross energy intake for cattle using the IPCC model, the following data is required for representative animals of each category (IPCC 1996):

Often, when a country adopts the IPCC Tier 2 model, not all data required for the Tier 2 approach are immediately available. However, default values and other sources of data can be used where statistical data or national research data are unavailable. Chapter 3 of this document describes the different sources of data that countries have used for the various parameters in the IPCC model for enteric fermentation and manure management emissions from cattle, providing a comparison of data sources used in the initial Tier 2 inventory with data sources in subsequent inventories. Country Case Studies for Bulgaria, Estonia and the United Kingdom describe how these countries have implemented the IPCC model for cattle in their national GHG inventories, as well as the improvements they have made over time.

The 2006 IPCC Guidelines recognize the potential for refinement of the IPCC model by using methods that incorporate factors that affect feed demand or feed intake or that affect the methane conversion rate (Ym), such as diet chemical composition. Some countries have implemented such refinements within the framework of the IPCC model. Examples include Slovenia and the United Kingdom, which have developed country-specific methods for estimating feed digestibility that are applied within the framework of the IPCC model (Inventory practice: Estimating digestibility using a country-specific approach in the UK, Inventory practice: Accounting for effects of increased concentrate use on gross energy intake and digestible energy in Slovenia).

Country-specific approaches
The basic elements of the IPCC approach for enteric fermentation are described in Eq. 1 above. In addition to refinements to the IPCC model aimed at improving estimates of feed intake or methane conversion factors, the IPCC Guidelines (IPCC 2006) encourage the use of Tier 3 approaches that use sophisticated models that consider diet composition and rumen fermentation processes in more detail, or that represent seasonal trends. Several countries have thus implemented country-specific approaches that represent more significant departures from the IPCC model. Many of these approaches can be considered Tier 2 or Tier 3 approaches. 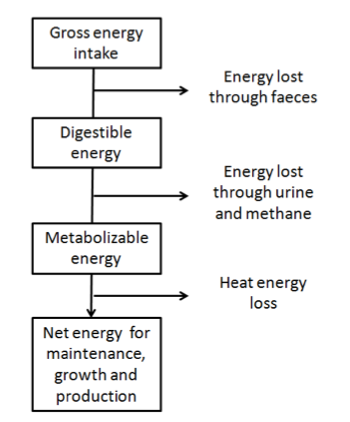 In general, both IPCC and country-specific approaches are based on a common livestock energy balance model that relates gross feed energy intake to net energy for maintenance and production (Figure 6). However, the specific method used to translate animal characteristics, feed characteristics or animal performance into estimates of intake, and the methods used to transform energy intake into methane emissions vary. Descriptions of selected country-specific approaches and their evolution over time are given in the Country Case Studies for Austria, Colombia, Denmark, India, Ireland, Japan, The Netherlands, New Zealand and Sweden. Figure 7 provides a stylized overview of some of these countries’ approaches in comparison to the IPCC model.

Figure 7: Selected country-specific approaches in comparison to the IPCC model for enteric fermentation 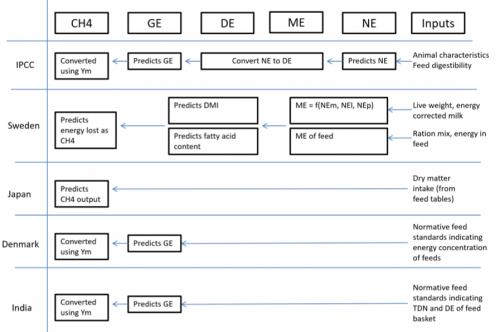 Many of the knowledge resources used in developing and applying country-specific approaches may also be applicable within the IPCC model. Examples of how these resources are used to meet specific inventory needs are described in the inventory practice case studies.