Overview of The Netherlands‘ current Tier 3 and 2 approach

The Netherlands has a strong history in agriculture. Livestock (dairy, swine and poultry), horticulture and arable farming are still major sub-sectors in the country’s economy. Key categories in the country’s latest inventory include enteric fermentation from dairy cattle, growing cattle and swine. For manure management, methane emissions from cattle, swine and poultry, and N2O emissions from manure management (direct and indirect following atmospheric deposition of NH3 and NOx) are key sources. In the Netherlands, methane emissions from enteric fermentation are primarily caused by cattle (89%), followed by swine (6%) and other livestock categories (sheep, goats and horses, 5%).

*Year refers to the year of NIR submission, NE=not estimated

A Tier 3 approach for mature dairy cattle uses a mechanistic, dynamic model representing fermentation mechanisms in the rumen. Rather than assuming rumen CH4 production, the model predicts CH4 production based on the effect of nutrition on microbial activity, volatile fatty acid (VFA) production and hydrogen surplus. By estimating methane production directly, the model clearly differentiates from other model approaches and calculation methods, and from the Tier 2 approach which uses a fixed methane conversion factor (Figure 1).

The model calculates (i) gross energy (GE) intake, (ii) CH4 EF (in kg CH4/cow/year) and (iii) the methane conversion factor (Ym; % of GE intake converted into CH4) on the basis of data on:

Due to differences in rations between the Northwest (rations mainly grass-based) and Southeast of the country (large share of maize silage) calculations for these regions are made separately.

For other mature cattle and growing cattle categories, enteric fermentation emissions are calculated by multiplying the gross energy intake with a methane conversion factor (Ym). As the production of white veal calves is an important sub-sector in The Netherlands, and considering the large share of milk products in their ration, in this case a country-specific Ym value is used. For all other cattle types (young cattle and mature non-dairy cattle) the IPCC 2006 default Ym is used.

Gross energy intake is based on rations calculated by the Working Group on Uniformity of calculations of Manure and Mineral data (in Dutch ‘Werkgroep Uniformering berekening Mest- en mineralencijfers’, WUM). Changes in GE intake are based on changes in both the total feed intake and the share of feed components.

Since 1990, there have been continuous increases in feed intake (20%), level of milk production (34%) and CH4 emission (17%), resulting in a continued reduction of CH4 per kg of fat- and protein-corrected milk (13%) (Bannink 2011). An increase in total feed intake has increased the emission factor over time, however a change in nutrient composition, contributing to (among others) feed digestibility has partly offset the increase in emission factor. An overview of emission factors for methane emissions from enteric fermentation is provided in Figure 2.

The following data is collected:

Data on nutrition and dairy performance are delivered by the Working Group on Uniformity of calculations of Manure and Mineral data (WUM) on a yearly basis. Data is collected and aggregated by a team under the coordination of Statistics Netherlands (CBS).

Data on the type, amount and chemical composition of by-products and concentrates fed to dairy cattle are collected by CBS by consultation with the feed industry and use of feed tables.

The Netherlands began using a country-specific Tier 3 approach for dairy cattle in 2006 to be able to justify a lower CH4 conversion factor than the average default value with the relatively high nutritional quality of Dutch dairy diets. At that time, the IPCC guidelines for a Tier 2 approach applied a default CH4 conversion factor of 6.5% of gross energy (GE) intake. This value appeared relatively high for Dutch conditions. Furthermore, using a constant conversion factor did not reflect variation in level of feed intake, feed digestibility and the composition and quality of the ration. A dynamic, mechanistic model to account for this variation was available already (Mills et al., 2001) and was adapted with an improved representation of the production of volatile fatty acids (Bannink et al. 2000; 2006); a crucial element for prediction of hydrogen balance and CH4 formation. Therefore, the Netherlands revised its method in 2005 by using this dynamic, mechanistic model as a country-specific Tier 3 approach from 2006 onwards.

The model is derived from the rumen fermentation model developed by Dijkstra et al. (1992) and extensively evaluated by Neal et al. (1992) and Bannink et al. (1997). The model, initially developed to model the fermentation process in the rumen, appeared to be suitable for methane modeling as well, and offered the opportunity to take more detailed ration composition and quality into account. The model thus enabled more precise methane emission estimations; each aspect of the model is based on scientific research. Evaluation studies by Neal et al. (1992) and Bannink et al. (1997) indicated the need to revise the representation of the amount and type of VFA as end-product of rumen fermentation. Subsequently, a database of in vivo data from lactating cows was developed and analyzed by Bannink et al. (2000; 2006). Mills et al. (2001) adapted the model by adding coefficients for digestion in the small intestine and a mechanistic, adding a dynamic, mechanistic module for microbial activity in the large intestine, and adding calculation of hydrogen balance in rumen and large intestine and CH4 formation. An updated version with a representation of VFA formation that is dependent on digesta acidity, applied as a Tier 3 approach was described by Bannink et al. (2011).

Revised feed intake, milk production and ration composition data for the years 1990 until 2007 (2009)

In 2009 revisions were made to derive input data on feed intake, ration composition and milk production figures from 1990 until 2007. Revisions included (i) inclusion of feed losses (of roughages, concentrates and by-products), (ii) an increase of the net energy requirement for maintenance and (iii) a correction for the ammonia-N fraction of N in crude protein (Bannink, 2011). Calculations of the methane emissions from enteric fermentation from dairy cows were subsequently revised. Results of the corrections are displayed in Figure 3.

In 2016, a slight modification was introduced to let the model apparent fecal N digestibility and excretion urine or ammoniacal N more accurately. This modification had negligible effects on predicted CH4 emissions however (a 0.03% higher CH4 emission factor; results not shown). 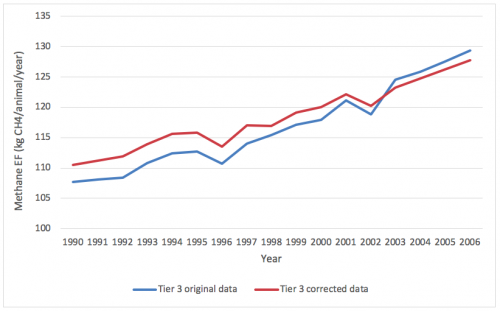 Manure management methane emissions from cattle, swine and poultry are a key category in the national inventory (NIR) and calculated using a country-specific Tier 2 approach. Methane emissions from manure are mainly caused by fermentation of organic matter in an anaerobic environment. As methanogenic bacteria take some time to produce methane, methane from manure stored for less than a month is very low. The conversion of organic matter in methane also depends on manure composition and environmental factors such as temperature. Methane emissions are calculated for liquid and solid manure management systems and, where applicable, also for manure produced on pasture land whilst grazing.

Manure management methane emission estimates are directly related to calculations done for methane emissions from enteric fermentation, as key input data consist of the amount of volatile solids (VS) produced per animal, which are again based on feed intake, composition and VS digestibility. The amount of volatile solids excreted by livestock depends on the digestibility of the organic matter and protein content of the feed. Data on feedstuffs and rations are used to provide this information (Zom & Groenestein, 2015).

Manure management methane emissions are calculated by multiplying the volatile solids excretion (VS, in kg) with the maximum methane production potential (BO, in m3 CH4/kg VS) and the methane conversion factor, which is based on the manure management conditions.
For all other livestock categories emissions are estimated using a Tier 1 approach (Vonk et al. 2018).

Bannink A. 2011. Methane emissions from enteric fermentation by dairy cows, 1990-2008; Background document on the calculation method and uncertainty analysis for the Dutch National Inventory Report on Greenhouse Gas Emissions. Wageningen, Statutory Research Tasks Unit for Nature and the Environment.