Country context: In the early 2000s, cattle contributed about one-third of UK total emissions of methane. In the early inventories, emission factors were separately estimated for four types of cattle (dairy breeding cows, beef cows, other cattle >1 year and other cattle <1 year. This was later increased to 8 sub-categories of cattle. Dairy cattle are a major source of emissions.

What data needs were addressed? Improved estimates of feed digestibility were needed.

Why was the data needed? The UK’s national GHG inventory implements the IPCC Tier 2 model for enteric fermentation and manure management, in which feed digestibility is an important input. When the Tier 2 model was first used, the UK used expert judgment and IPCC default values. Subsequently, improvements in knowledge in the dairy sector indicated that these prior estimates required revision.

Extension advice for dairy production in the UK has been based on the UK metabolizable energy (ME) feeding system, first proposed for use in the UK by the agricultural Research Council in 1965 (with revisions in 1980, 1990 and 1993). One strength of the system is that its mathematical structure enables it to easily be used in conjunction with feed value tables. The revision in FiM was needed to account for the higher genetic merit of modern cows, changes in representative diets and observed changes in ME requirements for maintenance. A new empirical model was made relating milk energy output (i.e. product of milk yield and gross energy concentration of the milk) and measured ME input, with full measurement of losses in feces, urine, methane and heat. The resulting equations predict ME requirements for maintenance and also the efficiency of ME use for lactation that varies with milk energy for lactation. On this basis, the total ME requirements for body weight gain, pregnancy, maintenance and milk production and activity can be estimated. 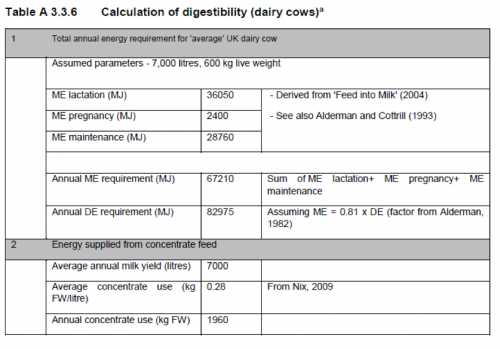 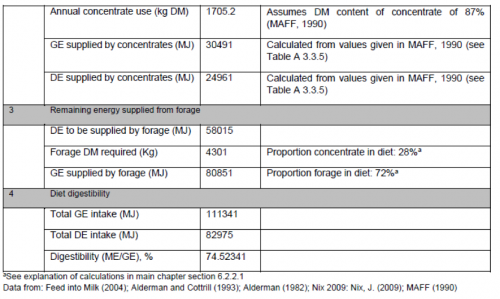 In the national GHG inventory, the FiM model is used to first estimate metabolizable energy for a typical level of milk production, in this case, 7000 liters. At this level of production, the farm management guide suggests average concentrate use of 0.28 kg per liter (Nix, 2009). The digestibility (DE as % of GE) value for concentrate feed (c. 82%) is estimated on the basis of a typical mix of protein and energy feed ingredients in concentrate. Using this value for ME supplied by concentrate, the annual ME requirement that has to be met from forage can then be derived. This is useful because the UK does not have detailed survey data on the amount of forage consumed by dairy cows. Assuming on the basis of expert opinion taking into account the proportion of time spent grazing by dairy cows that forage consists of 40% fresh grass, 50% grass silage and 10% maize silage, the relative proportions of concentrate to forage DM intake per year are estimated as 29% concentrate and 71% forage. The digestibility values for forage components are taken from the official feed nutrient value tables (MAFF, 1990).

The use of FiM is specifically for dairy cows. For beef cattle, digestibility values are based on expert opinion.