Agriculture, forestry, and other land use (AFOLU) accounts for about 46% of Colombia’s net GHG emissions in 2012 (IDEAM et al. 2017). Gross emissions from the AFOLU sector have been falling in recent years, while total removals have increased. Natural forests cover more than half of the country’s land area, and cultivated pastures and natural grasslands about one-quarter of the total land area. Pasture and grassland are mainly used for extensive cattle grazing. Historically, expansion of pasture has been the main driver of deforestation. Colombia’s NDC commits to reduce total national GHG emissions by 20% compared to a business-as-usual scenario, or 30% with international support. Sustainable cattle farming, including silvopastoral systems, are key measures being developed in Colombia to deliver on this target. A Sustainable Bovine Livestock NAMA has been proposed to increase efficiency in cattle production systems and conserve or restore natural ecosystems.

Enteric fermentation, in particular is a major source in the AFOLU inventory, accounting for 13% of gross emissions in 2012, 92% of which derives from cattle (IDEAM et al. 2017). Grazing animals also contribute almost 73% of direct N2O emissions from management of soils. Colombia estimates enteric fermentation from cattle using a Tier 2 approach and a Tier 1 approach for other livestock emission sources. A Tier 2 approach for cattle enteric fermentation emissions was first adopted in Colombia’s Second National Communication submitted in 2010 (IDEAM, 2010). The approach has been revised over time. Colombia’s Tier 2 approach began by using the IPCC model. In the latest inventory (IDEAM et al. 2017), activity data derived from expert judgement from various industry sources and emission factors were estimated using the RUMINANT model (Herrero et al. 2013).

Initial Tier 2 approach: In its 2010 national communication (IDEAM 2010), Colombia reports the results of applying a Tier 2 approach to 4 types of cattle (i.e., dairy and non-dairy cows, and non-dairy mature males and steers) in 24 of the country’s sub-national departments (Table 1). Livestock population data was provided by the Ministry of Agriculture and Rural Development (MARD) and industry associations and was then processed to estimate populations by climate zone for estimation of manure management emissions. The characterization of cattle was based on official national statistics, local research, and interviews with industry experts, including researchers, funding bodies, and associations of producers at the regional level (Nieves and Olarte 2009).

BUR1 Tier 2 inventory: In the inventory reported in Colombia’s First Biennial Update Report (IDEAM et al. 2015), seven sub-categories of cattle are reported, with one emission factor, applied in the country for each cattle category. Activity data for estimation of gross energy intake derived from various sources for different sub-categories, depending on data availability (Table 2).

Third National Communication: The Third National Communication (IDEAM et al. 2017) introduced a further refinement of the Tier 2 approach. Building on an ongoing program of research conducted by the International Center for Tropical Agriculture (CIAT), the most recent approach uses the RUMINANT model to estimate emission factors for different types of cattle in 10 regions in the country.

The RUMINANT model: The RUMINANT model was developed to predict feed intake, livestock productivity, and methane emissions in tropical conditions on the basis of animal and feed characteristics (Herrero et al. 2013). The model estimates intake based on animal characteristics and nutrient supply. Based on the chemical composition of feed, the model simulates the degradation and passage of feed. From this, metabolizable energy and protein supply to the animal is estimated, as well as other outputs, including methane production. RUMINANT simulates on a daily time step.

Validation of the RUMINANT model: With the financial support from USAID in the frame of the LivestockPlus project of CCAFS, CIAT is undertaking ongoing research to validate the capacity of the RUMINANT model to simulate enteric CH4 emissions under Colombian conditions. Prior to preparation of the Third National Communication, a short study was conducted using cattle fed on seven forage-based diets combinations, including 3 single forage diets and 4 mixed forage diets. Methane emission was estimated through both in vitro and in vivo (polytunnel) methods (Lockyer & Jarvis, 1995; Theodorou et al. 1994). The data on livestock and feed characteristics were used to run the RUMINANT model, and researchers then compared the CH4 emissions estimated with observed and simulated data (Ruden-Restrepo et al. 2017; Serena et al. 2017). The results showed that the RUMINANT model provided an accurate estimate of methane emissions, with a correlation coefficient (R2) between observed in vivo measurements and simulated data of 0.7 (Figure A). Correlations were particularly high for some of the mixed diets tested. Compared with the in vitro measurement data, the model had an even higher correlation (R2 = 0.92) (Figure B). 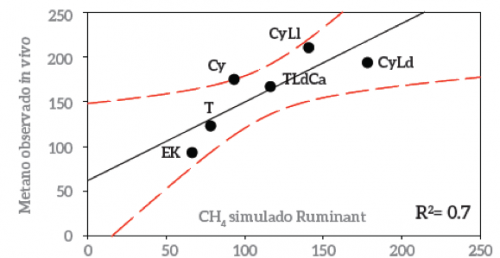 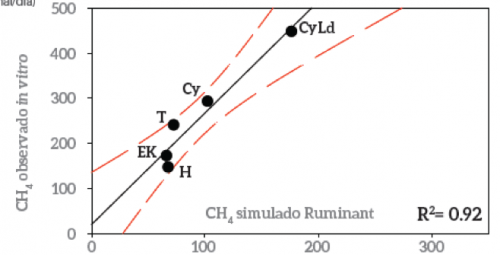 Application of the RUMINANT model in the national inventory: CIAT provided training to the national inventory compilation agency on the use of the RUMINANT model software. The model was parameterized using data on regional characteristics of each type of animal were collected by the Agricultural Synergies project, a Norwegian funded research project implemented by FEDEGAN, CIAT, and University of Princeton. The data were collected through 5 workshops conducted with academics, livestock producers, and agronomists in different regions of the country during which information on typical production systems were recorded. Data for seven different animal types in 10 regions and typical feed characteristics was input into the RUMINANT model. The model estimated daily methane emissions per animal. The inventory then applies this emission factor to the population data in each animal category and number of days alive.

The validated models can also be applied to ex ante assessment of livestock mitigation options in the Sustainable Bovine Livestock NAMA.

Herrero M, et al. 2013. Biomass use, production, feed efficiencies, and greenhouse gas emissions from global livestock systems. Proceedings of the National Academy of Sciences of the United States of America.