Country context: In the early 2000s, cattle contributed about one-third of UK total emissions of methane. In the early inventories, emission factors were separately estimated for four types of cattle (dairy breeding cows, beef cows, other cattle >1 year and other cattle <1 year. This was later increased to 8 sub-categories of cattle.

Why was the data needed? The UK’s national GHG inventory implements the IPCC Tier 2 model for enteric fermentation and manure management, in which animal weight data is an important input. However, when the Tier 2 model was first used, the UK had no official data on cattle weights. In its initial Tier 2 inventories, animal weight in 1990 was estimated by expert judgement, and animal weight for subsequent years was estimated by assuming a 1% increase per year. In the mid-1990s, this method was replaced with data from expert judgement from staff of the responsibility government department, and by estimating average weight using the rolling average of previous estimates. In NIR 2007, for dairy cattle, these methods were replaced with the use of slaughter weight data, while constant weight estimated using expert judgement was assumed for beef cattle. Subsequently, in-depth analysis of slaughter weight data was used to provide better estimates of animal weight for both dairy and non-dairy cattle.

How was the data gap addressed? The UK’s livestock sector has suffered from several major disease outbreaks in the past 3 decades. One side-effect has been that more comprehensive registration and tracing of cattle. For example, the British Cattle Movement Service (BCMS) was set up in the wake of the BSE crisis in the late 1980s. The relevant legislation requires all bovines to have a unique ear tag and a cattle ‘passport’, which are handed to the abattoir at slaughter, enabling full traceability of the source of all bovines slaughtered. EU legislation also required that a computerized system was put in place, and since the late 1990s, a Cattle Tracing System (CTS) records all births, movements and deaths. The CTS operates in England, Scotland and Wales, while a separate system operates in Northern Ireland. Abbatoirs are also legally obliged to identify each animal’s provenance (through the ear tags and passport) and also collect data on carcass weight and record the category of animal (e.g. cow, heifer, steer, young or mature bull or calf). 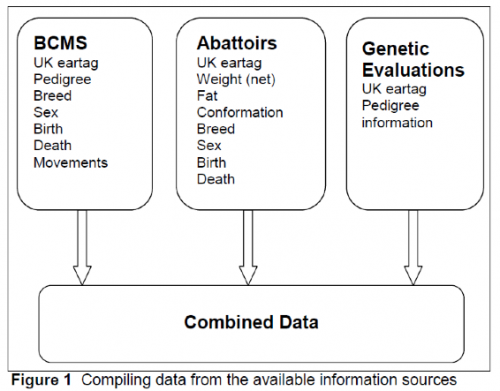 Both CTS and abattoir data record ear tag numbers, but the two datasets had never before been matched. Research by Tracey Pritchard and Eileen Wall at SRUC, primarily conducted for the purpose of producing estimated breeding values from carcass traits, matched the BCMS dataset with abattoir data. For the purpose of estimating weights for the GHG inventory, ear tag numbers and associated birth date and sex records from the BCMS dataset were matched with ear tag numbers, sex record and net weight data from 6 abattoirs. In 2014, 3.9 million carcass records from 2001-2014 were obtained from the abattoirs, representing about 30% of the national slaughter population. For 4 abattoirs, almost all ear tag identifiers could be matched with identifiers in the BCMS dataset. For two abattoirs, however, because a portion of intake came from Ireland or Northern Ireland, the datasets could not be matched. The data also had to be cleaned to remove very low net carcass weight estimates that probably represented erroneous data entry. Thus, the average net carcass weight for each category of cattle (defined by age at slaughter and sex) could be calculated. A comparison of the national herd population data with the structure of the abattoir sample data showed that the composition of the abattoir sample closely resembled that of the national herd. Thus, although the data represent 30% or less of the national herd slaughtered every year, it can be considered representative.

The net carcass weight data supplied by the researchers to DEFRA for GHG inventory compilation is then converted to a live weight estimate assuming a killing out percentage of 50%, which was applied to all breeds. This estimate derived from research conducted in Ireland which has similar breeds and production systems to much of the UK that was published in a scientific journal (Minchin et al. 2009).

The original research that produced these data continues with funding from the Agriculture and Horticulture Development Board a statutory levy board independent of industry and government to further research on the genetics of lifetime performance. Several abattoirs now send slaughter records on a monthly basis by automated data transfer. The BCMS and the abattoirs have signed data-sharing agreements with SRUC, as the data is commercially sensitive. The use of the data for making inputs into the national GHG inventory is the only agreed use outside of the primary purpose of the genetics research.