Country context: Georgia is a country in the Transcaucasus region that lies between Eastern Europe and Western Asia. The common native cattle breeds Georgian Mountain and Red Mingrelian cattle are late maturing breeds, characterized by small body size and low milk yields with high fat content. Intensive production systems are limited, and most cattle are raised in extensive grazing systems. During the period of the Soviet Union, more productive early maturing breeds were introduced. Georgia’s GHG inventory began to use a Tier 2 approach for cattle in 2009. Prior to that, a Tier 1 approach was used by applying the IPCC default for the Asia region to late maturing breeds and the default values for Easter Europe to the early maturing breeds.

Why was the data needed? Cattle account for about 90% of enteric fermentation emissions in Georgia. Enteric fermentation is a key source in the national GHG inventory. Therefore, following IPCC Guidance, a Tier 2 approach to estimation should be adopted, including enhanced characterization of cattle.

Methods used: Expert judgement for distribution of population among breeds; herd modelling for structure of the herd among age-sex groups.

By applying these rules in a monthly time step model, the age and sex structure of the cattle population of each breed changes on a monthly basis and annual population estimates can be derived, considering the number of months each animal type is alive. Emission factors for each sub-category of animal are then estimated on the basis of age, sex and breed-specific characteristics (see examples in Tables 1-3), which are then applied to the modeled population to estimate total emissions. 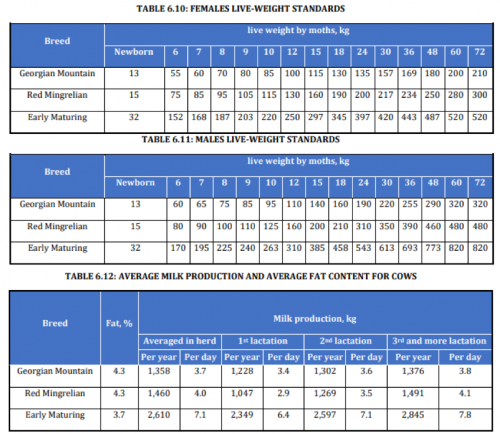